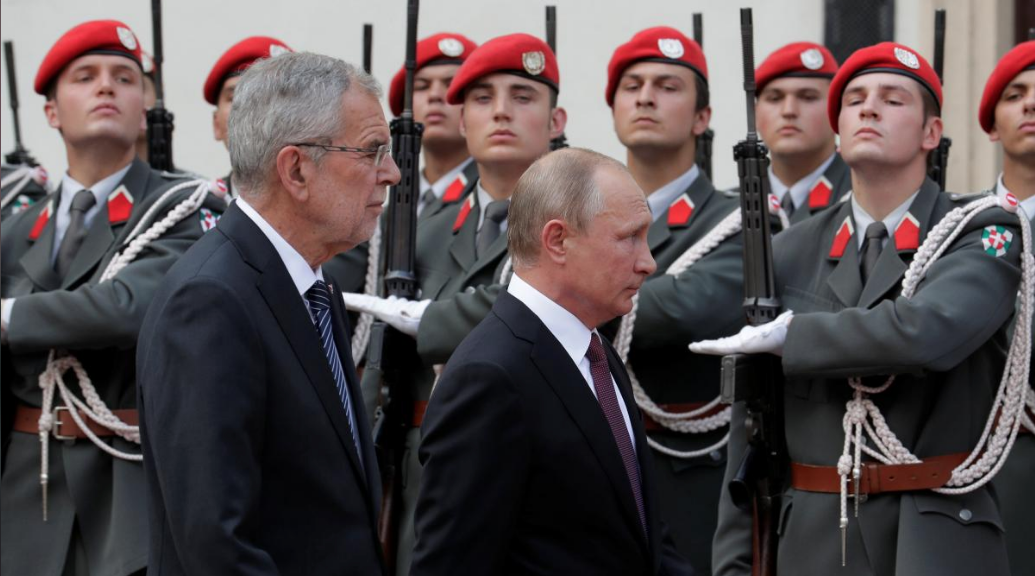 It was a warm welcome Vladimir Putin received on his 6th visit to Austria since 2001. Initially the Austrian side considered to arrange a state visit, but in the end,  it was downgraded to a working visit. Hard to tell whether this was due to outside pressure to have no visit at all or some other reasons. Officially, the visit was linked to the 50th anniversary of the gas sales contract between Austria and the late Soviet Union signed back in June 1968. In reality, this visit was part of a deliberate Austrian effort to raise its profile inside the EU with regard to relations with Russia.

Austria’s government had decided to make it a decisive effort to improve relations between the EU and Russia. Austria’s relations with Russia have been smooth and friendly all along, even during the times of crisis that had started with the crisis in Ukraine in 2014. Austria, which will take over the Presidency of the European Council in the second half of 2018, will start several initiatives to reinstall the formal dialogue between EU institutions and Russia, which was terminated by the EU in March 2014. It is a deliberate effort to discontinue the deterioration of EU-Russian relations.

Obviously, Austria is a small country which lacks the influence to realign the EU’s Russia policy. However, Austria is not isolated with its ambition in the EU. Italy, Slovakia, Hungary, Greece and Cyprus share this ambition with Austria. At the end of the day, however, these dissenters are still a small minority within the ranks of the EU members. So, the Russian side does not have any big illusions about where Austria’s strategy will lead to. Still, the initiative is very welcome. Like the visit itself it demonstrates that Russia is far from isolated politically and diplomatically.

For Austria, this strategy runs with two essential risks. First, the most influential members of the EU, but also the USA have put pressure on the government not have this visit at all, or at least downgrade it in terms of protocol. Many of them have criticized the Austrian government for establishing sort of a special relationship with Russia (“Sonderweg”) thus undermining the coherence of the EU. The second risk that comes along with Austria’s effort is that reestablished channels of dialogue will lead to nothing. Both the EU and Russia are highly likely to make no substantial concessions when it come to the most divisive issue between the EU and Russia – the crisis in Ukraine.

As to the visit himself, Putin succeeded with a charm offensive. What was striking was the submissive role the Austrian Federal President van der Bellen took during the presser after talks with Putin. Van der Bellen conceded that Russia does not have a credibility problem and also argued that there is no crisis of confidence between the EU and Russia. If this were true, why does the Austrian leadership then engage as a “bridge builder” between the two sides. If there is no deep mistrust, estrangement and mutual recriminations why is there a need for Austria mending fences? Unlike van der Bellen, Chancellor Kurz, who is the mastermind behind Austria’s Russia policy, was more critical, reminding Russia about it responsibility to bring an end to the crises in the Donbass and in Syria.

The climax of the visit was the signing of a new gas delivery contract between Austria’s energy company OMV and Gazprom. While the existing contract would have expired not before 2028 the two sides were interested to demonstrate mutual trust by extending the contract already now till 2040. In addition, Austrian companies demonstrated a strong wish to intensify bilateral trade and investment in Austria at a Putin talk in the Federal Chamber of Economics.

When Putin finally left after a short working visit of ten hours, both sides seemed satisfied with what was an extremely friendly and cordial encounter.

One thought on “Friends.”